Today, we should all take time to recognize the sesquicentennial of the Washington Arsenal explosion.  In fact, the weather was very similar to the conditions in DC today on June 17th, 1864. The explosion was precipitated by fireworks laid out to dry by the Arsenal’s superintendent. The hot June day caused the fireworks to explode into the choking room where workers were filling cartridges with gunpowder. The resulting explosions and fire claimed the lives of 21 women, many of them young Irish immigrants working as the sole providers for their families.  17 of these victims are interred at Congressional Cemetery. 15 women were laid to rest beneath the Arsenal Monument, and two are interred separately in family plots. 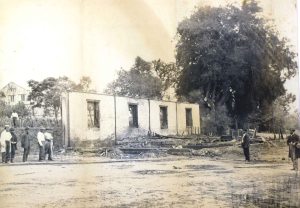 Aftermath of the Arsenal explosion. Library of Congress.

These dates and facts seem very straightforward, albeit sad. However, in the short time I’ve been working at Congressional Cemetery, I’ve noticed that the Arsenal explosion  has a way of captivating historians and casual visitors alike. It is a vivid moment in history and a tragic insight into Civil War-era Washington, D.C. The Arsenal monument is one of the most striking monuments here at the cemetery, but I must have passed it dozens of times before I truly realized the impact of the tragedy. When I finally took the time to read Brian Bergin’s book, The Washington Arsenal Explosion, I truly understood the scope and heartbreak of the disaster. Bergin was able to immerse himself, and his readers, so completely in 1864 Washington, D.C. and the lives of these young women that it is impossible to read this book without being affected by the enormity of what happened. I can’t recommend Bergin’s book enough for those who wish to learn more about the disaster.

Congressional Cemetery will also be hosting two ceremonies to commemorate the Arsenal explosion. On Wednesday morning (June 18th), the Irish Deputy Prime Minister Gilmore will lay a wreath on behalf of the Government and people of Ireland in honor and recognition of the Irish women who died so tragically 150 years ago this week. The public is invited to attend this historic occasion, and the ceremony and wreath laying will begin at 9:45 a.m.

Civil War historian Steve Hammond is another man who has worked tirelessly to recognize and memorialize the young women killed in the Arsenal explosion. As a result of his efforts, the cemetery is hosting a ceremony this upcoming Saturday, June 21st at 1 pm to honor the victims. Erin Bergin Voorheis, Brian Bergin’s daughter, will also speak about her father’s book and the Arsenal disaster. Please join us in commemorating and remembering the sacrifices of these young women.

For more information about the ceremony: Congressional Cemetery website

For more information about the Arsenal explosion:

This entry was posted in Uncategorized. Bookmark the permalink.